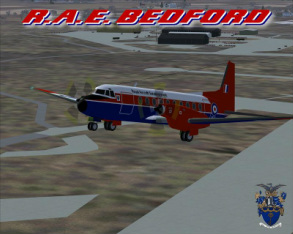 Hi folks.....sorry it's been so long to update the site, but there has been a lot going on. Brian Clarke has been vigourously working behind the scenes to produce some fantastic sceneries for the more obscure retro bases, so much so that I have created a new Scenery menu tab, and all of his scenery packages can be downloaded from there. Some of these packages also contain repaints by yours truly - plus there is still more to come.
On the production front, John Young has released his F-111 models, Canberra's and the most eagerly-awaited, the Buccaneer. Mike Pearson has now finished his COMPLETE Mirage series, and has started bringing out the F-104 Starfighter. Behind the scenes, he is also working on the F-102.....so lots yet to come!! 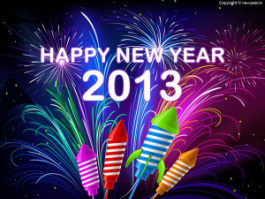 Well, a happy new year to you all, hope Santa brought you what you all wanted and hope that this year turns out better than last. There is a lot of exciting stuff on the way this year in terms of AI, especially on the retro front. Mike Pearson is storming ahead with his Mirages (now on the IV), century-series fighters anf the F-8, John Young has finally published his F-111 and Lightning packs and Brian Franklin (he of simshed) has announced that he is going to try and make an AI Nimrod - so good news all round. I'm kicking of my new year with a re-vamp of RAF Binbrook, using Johns Lightnings this time, and a couple of updates to make the frightening base a little more homely. You can get it now from the Retro page. Enjoy!

As promised, the Daks and Ravens have been uploaded. If anyone wants the FSX Ravens, they are available on flightsim and avsim - strictly FS9 here only! Both can be found on the Retro AI page.

Sorry everyone, I've just noticed that the 4 Sqn end -of-service paint for the Iris Harrier was linked-up wrong - have now corrected so that the picture goes full size and the download link is what it says it is!

Also......I shall be uploading my RAE Dakota's and UH EF-111A's very shortly, but they are available from flightsim.com and avsim.com - just search for Daryl Payne!

A new repaint for the Iris Tornado GR4 - this is a special scheme that was painted on a non-flying instructional airframe at RAF Marham; but thanks to the flightsim, she can now grace your skies. Available on the RAF Tornado IDS page.

Stewart Pearson has kindly made a revised background poly for Sembach to improve the airport ground textures. Download
Also, if you have FS Genesis and Ultimate terrain, Stewart has also done a fix for that as well. Download 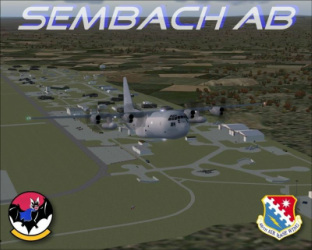 Very excited to introduce to you the scenery debut of Mr. Brian Clarke - and boy what a start......Brian has re-created the spook world of Sembach AB in Germany. This package is a product of co-operation between Brian, myself and Chris A. Brown, with voicepack contributions by Stewart Pearson. Thanks to these guys, not only do we have the scenery, but also included are six EC-130H Compass Call aircraft, lovingly reproduced by Mr. Brown, complete with a representative set of flightplans by yours truly.

Added a new page for Splash Screens......in the menu on the left 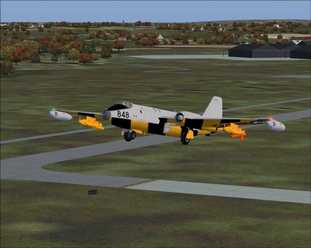 Well, John Young has finally released his retro scenery for RAF Marham, and also, along with this, AI Victor and Canberra models. As a result, I have repainted the four TT Mk 18's that were in use with the Royal Navy's FRADU, based at RNAS Yeovilton, during 1990. Available on the retro page. Enjoy!

Ooh.....in case you were wondering, I may have been quiet on here - but things are afoot :)

There was a problem with the Alphasim/Virtavia Typhoon fix that I didn't realised had happened, which made it unavailable. It is now available for download. Thanks to Daniel Grove.

A slight update on the world of military AI.....things are getting very busy again, with John Young about to release his 1993 version of RAF Marham, complete with custom-made Victor Tankers and Canberra's.......and that's not all! The Victor package will also include the Bomber and SR variants, plus the Canberra also comes in B, TT and T versions as well.

Mike Pearson is also busy: he has recently shown early-developement shots of the F-104 Starfighter, the F-8 Crusader and the Dassault Mirage III.....not forgetting of course, being that it is Mr. Pearson we are talking about here, that he will eventually do ALL variants of said models (with the exception of the two seat F-8) so lots and lots to look forward to in a retro way! Happy simming!! 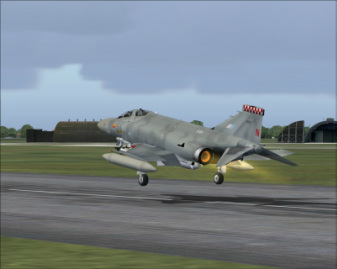 ITS HERE!!!!
Finally, after nearly eighteen months, I have finished the package for RAF Wattisham. 56 Sqn and 74 Sqn, with their unique F-4J(UK) models, are now once again flying around the Suffolk countryside, and further. Please read the enclosed docs as there are some extra downloads needed to get this package up and running......enjoy!! 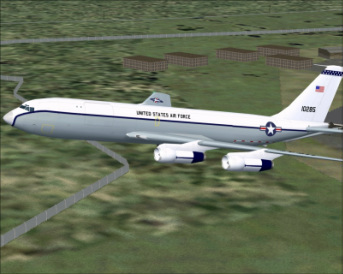 Well the waiting is over!! I have just uploaded four repaints of the Boeing EC-135H which was based at RAF Mildenhall from the 70s until the late 90s and operated in both the tanker role and as the USEUCOM command posts, otherwise known as Silk Purse. They are on the Retro AI page and include some simple flightplans.

Unfortunately, due to a change in circumstances, I shall not be updating the site or doing any more paints or packages for a short while - now whether this means days, weeks or months I do not know, but I promise I will be back and hopefully with an improved site as well. All I ask is that you please bear with me. Like Arnie said, "I'll be back".

To celebrate the 100th anniversary of its formation in 1912, No. IV(AC) Sqn has repainted Hawk T2 ZK020 in this rather flashy design. And it is now available on the Hawk download page.

Due to some funny goings-on with either avast or weebly, I have had to change the web address of this page. The address is now www.dprepaints.weebly.com
Sorry for the inconvenience folks, but it was the easiest way around the problem, without going into gobbledy-gook.......after all, it is free! 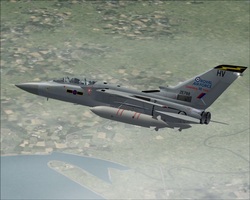 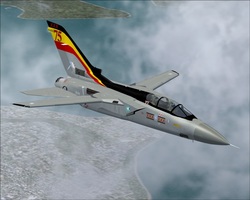 Well, after doing the AI version - I couldn't but help do the flyable version; so here she is again, textures for the IRIS Tornado ADV........ 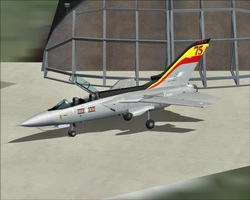 Just added a new AI Tornado for 29 Squadrons 75th Anniversary back in 1990. Get it from the Retro AI page! 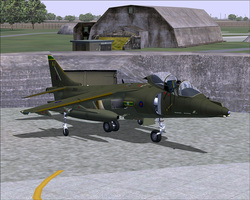 Just added another Iris Harrier - this time a Green-coloured model from 3 Sqn back in 1995. 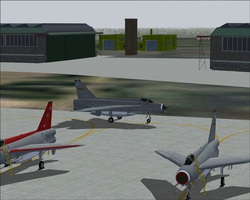 Just uploaded now, RAF Binbrook as it was during early 1988, just 6 months before the station, and consequently the English Electric Lightning, said bye-bye. Repaints for 22 aircraft from Nos. 5 & 11 Sqns, plus a simple scenery for RAF Binbrook and flightplans are now available from the AI packages page.

Mike Pearson has got yet another AI project on the go - this time he goes behind the Iron Curtain, and presents the MiG-21 family. From his statement on MAIW:
"Part 1: 1st/2nd Generation builds, in final beta-test (F/P models)
Part 2: 3rd Generation builds, in final modeling/texturing (M/S/bis models)
Part 3: Foreign builds and Re-Furbs (India, Romania, Czech, etc.) not counting PRC, in production
Part 4: Foreign builds (People's Republic of China), in production
Part 5: Two-Seaters, in final modeling/texturing (U/UB/US/UM/U-400/U-600). A lot of these are just country-specific, or with avionics changes only. Also, I may just slot these in with other parts of the project, since I have the basic U/UM models nearly done anyways."
I am helping in the Beta-testing of these models, and from what I have seen so far, we are definitely onto a winner here!

Missed out a small detail on the fuselage - if you have already downloaded it, you will need to download it again....sorry :(

Uploaded to more paints for Rick Pipers Chippy; both depict WK518, a member of the Battle of Britain Memorial Flight, as she was in 1994 and in her new colours for 2012.

Sorry peeps, there was an error with one of the textures on the 4 Sqn end of service model, this has been corrected but you will need to re-download the textures.....sorry :(

Decided to add a new page here, really in opposition to the Blog page, which is really about the site developement, whereas here I shall try to keep you abreast of all Military AI news, including newly-released packs and aircraft, or previews of what is coming (subject to permissions by the authors of course) 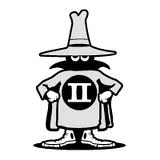 Mike Pearson is a well established name in both the civilian and military flyable and AI auditoriums; he has painted literally thousands of jets, as well as producing complete Air Force sets for some CIS countries.
Recently, though, he has taken a hold of an aircraft made by another Military AI afficionado, Nick Black (MAIW, Retired) and is in the process of completely "upgrading" Nicks F-4 Phantom models, in the hope of producing every major type of the aircraft, along with multiple loadouts. It's a huge job, but so far Mike has released the F-4B, C, D and J plus the first of the UK models, the F-4J(UK) or F.3. He has very graciously allowed me to post up pictures of his latest upgrades, those of the F-4K and F-4M (known as (FG1 and FGR2 respectively in UK service). So have a perusal at these very tempting aircraft and be prepared for a storm of retro proportions at Avsim soon......many thanks to Mike Pearson for allowing me to share these previews. 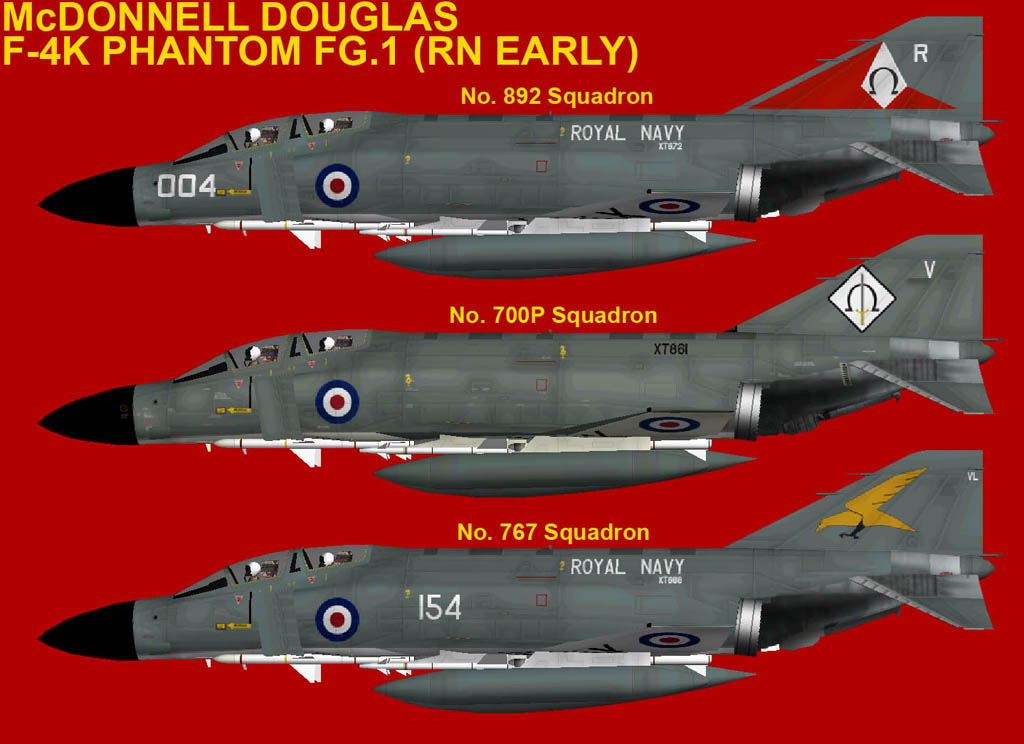